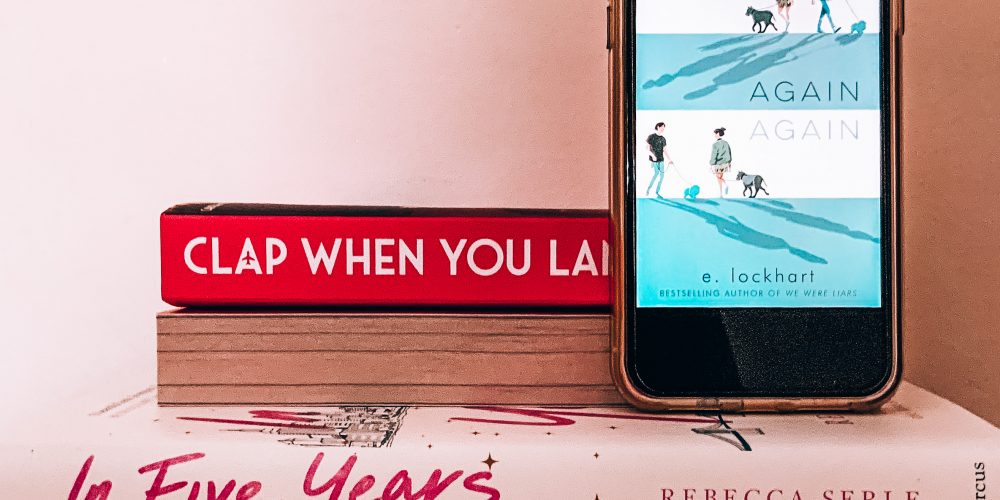 In my defence for this blog post, I hadn’t intended on it being born. But, when you’re scrolling for books, trying to save as much money as you can, finding six books under a £1 each on Kindle meant I had to spring into action.

Also, annoyingly for me but not for you, I found not one, but four books I’ve recently purchased reduced on Kindle.

So, because I’m a kind, book-girl, I thought I’d highlight them in case you fancy bagging yourself a steal. Here are Six Books Under a £1 On Kindle right now!

I do not know how long these offers will remain at 99p.

Clap When You Land

I have been so excited to read this one! My co-host of The Island Library has read this and adored it. I cannot wait until I can dive in these pages, and so grateful Laura bought me a copy for my birthday.

I’ve included it here because the summary alone should make you want to buy it, but as a bonus its currently 0.99p on Kindle.

Summary: Camino Rios lives for the summers when her father visits her in the Dominican Republic. But this time, on the day when his plane is supposed to land, Camino arrives at the airport to see crowds of crying people…
In New York City, Yahaira Rios is called to the principal’s office, where her mother is waiting to tell her that her father, her hero, has died in a plane crash.
Separated by distance-and Papi’s secrets-the two girls are forced to face a new reality in which their father is dead and their lives are forever altered. And then, when it seems like they’ve lost everything of their father, they learn of each other.

This book BROKE me. I ugly cried. I thrust it upon so many people. The fact it has ‘The most heartbreaking novel you’ll read’ didn’t deter me, it shouldn’t do with you.

I couldn’t believe my eyes when I found it for the price it is on Kindle.

Summary: Type-A Manhattan lawyer Dannie Kohan has been in possession of her meticulously crafted answer since she understood the question. On the day that she nails the most important job interview of her career and gets engaged to the perfect man, she’s well on her way to fulfilling her life goals.
That night Dannie falls asleep only to wake up in a different apartment with a different ring on her finger, and in the company of a very different man. The TV is on in the background, and she can just make out the date. It’s the same night – December 15th – but 2025, five years in the future.
It was just a dream, she tells herself when she wakes, but it felt so real… Determined to ignore the odd experience, she files it away in the back of her mind.
That is, until four and a half years later, when Dannie turns down a street and there, standing on the corner, is the man from her dream…

So. I just bought this. It’s sat in my book tray because the cover caught my eye and it was recommended to me because I loved The Flatshare.

But, if you loved The Flatshare, I’ve heard this book will be right up your street.

Summary: Armed with a super-sized backpack full of optimism, Jess sets off in search of sun, sea and a much-needed new beginning.
Things don’t get off to a good start.
Instead of sunshine, she’s met with torrential rain. Her job prospects are as dismal as the weather and that friend-of-a-friend she was meant to stay with has fallen through. Just as Jess is homeless, jobless and wishing she’d gone for the waterproof mascara, she runs into the last person she expected to see. Sam. The ex she never got over. Jess always believed that one day fate would bring them back together. Now he’s here, more gorgeous than ever.
Before she knows it, Jess is accepting Sam’s offer to stay in his spare room. But while she may have been less than truthful about the mess she’s in, there is also one rather important thing Sam has neglected to mention.
Suddenly Jess isn’t just living with her ex, but with his new girlfriend too. All of that baggage she thought she left behind may have caught up with her…

The Day We Met

This was another, bought it then I saw the price on Kindle and wanted to kick myself books.

It’s romance, so you know it’s up my street. But, it was the ‘what the authors are saying’ that made me throw it in my basket.

“A must read-epic love story that will have you rooting for the characters from the moment they meet. Both heartbreaking and uplifting, be prepared for an emotional rollercoaster‘, Anna Bell”

Thanks Anna, I feel I’m going to need chocolate for this one.

Summary: Stephanie doesn’t believe in fate, true love or living happily ever after. She’s content enough being engaged to Matt. But then she meets Jamie, who understands her more than anyone else ever has.
Jamie is happily married to his childhood sweetheart Helen and believes in everything Stephanie doesn’t. So why does he have such a strong connection with Stephanie?
When Stephanie and Jamie meet one fateful weekend in 2006 it will change everything…
Ten years. Two people. One epic love story.

I love, love, loved this book. It’s a cute, super easy read that’ll steal hours out of your day.

It’s currently also a steal at 0.99p, so you can’t argue with that really.

Summary: A wedding planner left at the altar? Yeah, the irony isn’t lost on Carolina Santos, either. But despite that embarrassing blip from her past, Lina’s offered an opportunity that could change her life.
Marketing expert Max Hartley is determined to make his mark with a coveted hotel client looking to expand its brand. Then he learns he’ll be working with his brother’s whip-smart, stunning—absolutely off-limits—ex-fiancée. And she loathes him.
If they can nail their presentation without killing each other, they’ll both come out ahead. Except Max has been public enemy number one ever since he encouraged his brother to jilt the bride.
Soon Lina and Max discover animosity may not be the only emotion creating sparks between them.

She’s the author of We Were Liars and many others, so purchasing this was right on the top of my agenda today.

Thankfully, I saw the price for this one before ordering a more expensive copy, so I grabbed a deal. Now is your chance to as well.

Summary: When Adelaide Buchman’s younger brother succumbs to a drug overdose, she saves his life. In the aftermath, looking for distraction, she becomes a stylish, bright charmer who blows off school and falls madly in love – even though her heart is shattered.
Adelaide is catapulted into a summer of wild possibility, during which she will fall in and out of love a thousand times while finally confronting her brother, their history, and her own strength.
A raw and funny story that will surprise you over and over, Adelaide is an indelible heroine grappling with the terrible and wonderful problem of loving other people.

And there we have it! Six Books Under a £1 On Kindle right now!

I hope you love these books. Come back, and let me know, and in the meantime, I’ll keep my eyes out for more steals on the way.