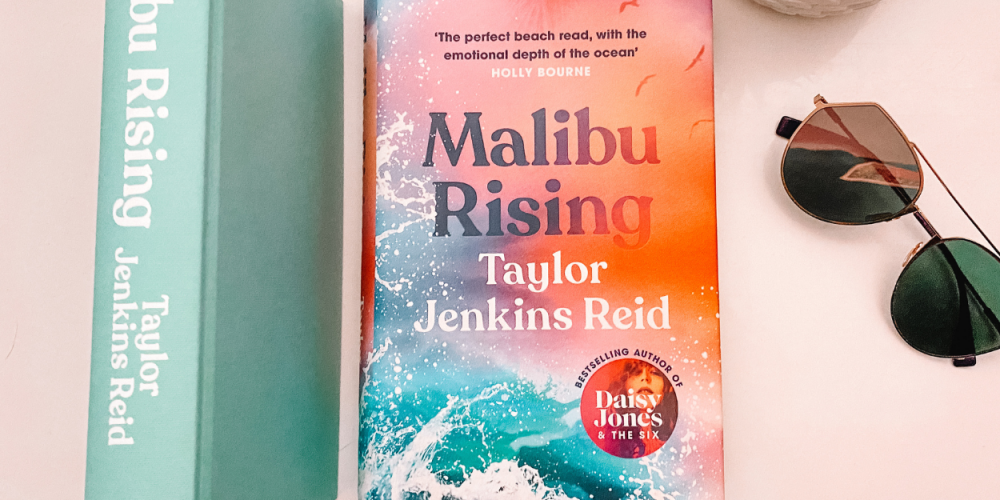 It’s been a while, but I am back, a ‘Malibu Rising’ by Taylor Jenkins Reid sort of bang.

For anyone new here, Taylor Jenkins Reid has quickly become one of my favourite authors. Whenever I plunge into their work I find myself so enthralled, emotional and deeply changed. Her latest novel is no different. Coming at you with a beachside party combining it with a hauntingly emotional backstory to the Riva siblings.

It’s 1983 in Malibu. It’s the day of Nina Riva’s annual end-of-summer party, and anticipation is at a fever pitch. Everyone wants to be around the famous Rivas: Nina, the talented surfer and supermodel; brothers Jay and Hud, one a championship surfer, the other a renowned photographer; and their adored baby sister, Kit. Together, the siblings are a source of fascination in Malibu and the world over. Especially as the offspring of the legendary singer, Mick Riva.

Nina never wanted to be famous, but then she had little choice when she needed to look after her siblings. On top of her anguish, she’s also just been very publicly abandoned by her pro tennis player husband. She throws the party for everyone else, but in 1983, everything changes. While the mansion will burn to the ground by the morning, it isn’t the only thing that will be forever changed. As secrets, dreams and futures are laid out amongst the music, drugs and alcohol.

Malibu Rising is focused on the Riva family, being told from two timelines to set the stage for this famous and troubled family. In the ‘present’ of 1983, we meet Nina the daughter of Mick Riva and eldest sibling. She is gearing up to throw the famous, once-a-year party at her mansion. An event where the likes of actors, musicians, athletes and everyone else in between will attend. However, Nina is dealing with a lot, her husband had just left her for another woman, publicly at that.

Interwoven in this is flashbacks to the 50’s to the present. This is where we meet Mick Riva and June, the Riva siblings parents. We see them go from adoring promises, soft kisses and a romance destined to cause jealousy. In time, as Mick Riva’s rockstar life begins to take off, June finds herself more heartbroken than happy. She saves face for her children, Nina and Jay but this all falls apart when a woman she hasn’t ever met turns up at her doorstep, a child in hand, and says the baby is Mick’s and leaves. Adopting Hud, raising it as her own is no easy decision, but one June makes without question. When Mick’s philandering ways repeat after Kit is born, June is unsurprised to find herself alone, raising four children and her heart utterly shattered.

In the present, all the siblings have grown up as normal as they can be. Nina has become a supermodel, Jay is a professional surfer, Hud is a photographer, and Kit who is figuring herself out.

They all have different ideas of what they want the party to go like, but will any get their wish?

The choice to interlace the history and its placement within the present storyline was brilliantly executed. Each time we go to the past, we find another reason these four people should be more fractured. You think it’s sad, and then it gets sadder; it pulls so much on your heart it is hard to put down. Nina’s struggle to keep things together becomes more apparent as the story progresses and her unwavering decision to do what she needs to for her siblings is so powerful.

June and Mick were toxic from the get-go. They were troubled from the moment we meet them, the way they are written is stunning. It was so gritty and truthful, to the point it sticks with you. You can begin to see why each of the siblings are dysfunctional, broken and scarred by their pasts. It provides the chance for us to see what comes of June and her heartache, betting on the promises of a man, and how Nina found herself having to step up and be the mother for her other three siblings. It allows a perfect execution of why she has become the person we know in the present; this caretaker, who people-pleases and doesn’t dare risk rocking the boat for her own happiness.

Over Malibu Rising, I loved how we had to burn this preconceived idea that they found and grew up with money and fame. Instead, they’ve had to fight to be that way, not given to them as the blurb initially lets you believe. They’ve been through deep trauma, having to scrape together and work as a team, when things should have been easy when their Dad is who he is. But this adds so much to the book, it pulls you down several pegs as you realise their success is all their own. I think one of my favourite things is how their future became dependent on what was an innocent moment. The four of them finding a surfboard outside their grandparent’s restaurant, and it became something they all become something from.

Nina’s strength from this point stuck with me. Realising how much she sacrificed, how much she viewed what she had done as selling herself to help give her siblings the best hit me so hard. As soon as this became apparent, I think I gripped the book more firmly, needing to get to the end in the hope she finds herself a slither of happiness which she truly deserves.

I enjoyed the prose, but I’ve expressed this previously with other works by TJR. I feel her writing has gone from strength to strength, offering human moments and going a step further to tug on your emotions and live in the space between book and your heart. The way we switch from character to character during the present to get a better view of the party and what is occurring, is brilliant. It allows us to be in the heads, even briefly, of those who are not just the Riva siblings. These transitions are seamless, providing another blotch to this wickedly beautiful painting. It also provides a chance to take a step back and process, which is often needed with how deep this book will go.

The nods to some of Taylor Jenkins Reid’s other works, such as The Seven Husbands of Evelyn Hugo and Daisy Jones & The Six, were brilliantly executed. Especially as this was just as glitz and glamour as her others. Having the nod to the wider universe made me grin, even if the mention of Celia almost made me sob.

One Wish For Malibu Rising

My only wish is we got more of the boys, Jay and Hud. It’s a small wish, and purely for myself (selfishly). While their arc wraps up nicely, I just wanted a little more.

They had such interesting premises, and while there’s enough to feel satisfied, with their stories wrapped up, I would have loved for the writing to delve into Jay’s health condition a little more. Over where his headspace is, as we toe the line but don’t get a direct answer. However, as much as the story is about him, it isn’t. And this is purely a small thing which won’t add/remove anything from your enjoyement. I’m just selfishly wanting more of them.

For me, I personally think your enjoyment of Malibu Rising will depend on if you are a fan of TJR work and her style of writing. The distance is what makes it beautiful, allowing you to add your own feelings. The way you’re at arm’s length a touch, letting you fill in the remainder with your personal feelings is what makes this story that bit more powerful. It allows me to fall deeper in, and the personal connection to a childhood divorce only strengthened that for me.

It was scandalous but had so much heart. I liked that we got snippets of other characters, and what was occurring at the party, but the focus always came back to Nina or her siblings. The ending, for me, was brilliant. I like that we don’t exactly know what comes of everyone but that we get to see some of our questions answered.

While there are things I wished for more of, I can’t deny how much I enjoyed the story. I was so broken when it ended, and how much I love TJR writing. All of her books seem to hit me, resonating with me far past the page. It’s why she’s an auto-buy author for me. I’m thankful Malibu Rising is another notch in my argument as to why TJR is my favourite author.

9 Brilliant Books To Read This Year 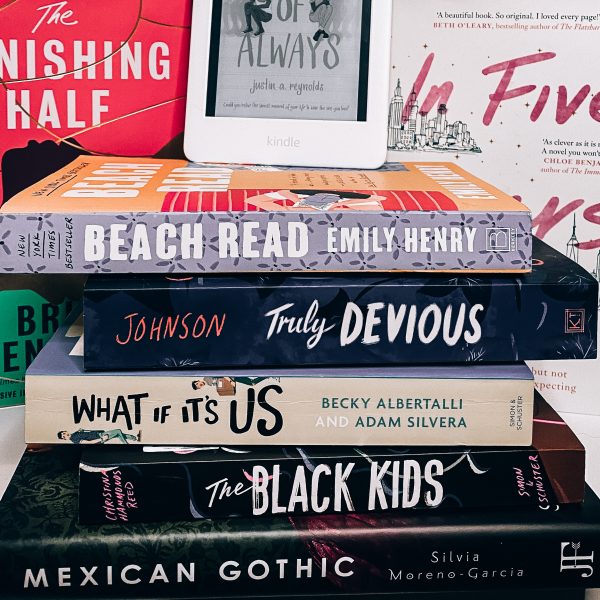 Book review on M.L Rio’s multi-layered If We Were Villains 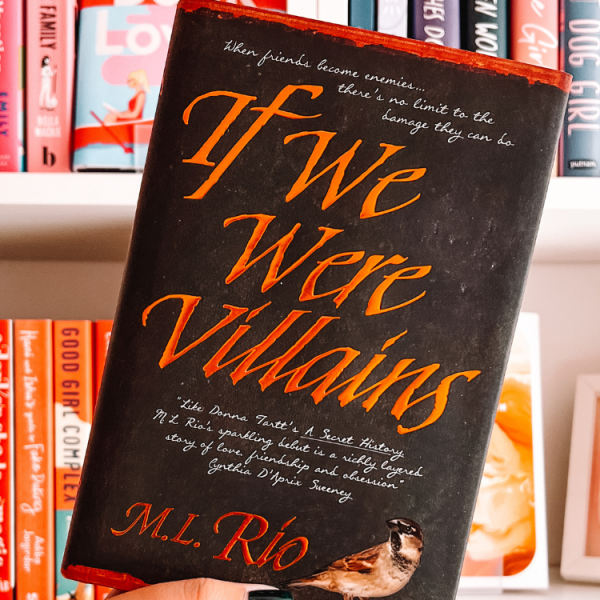 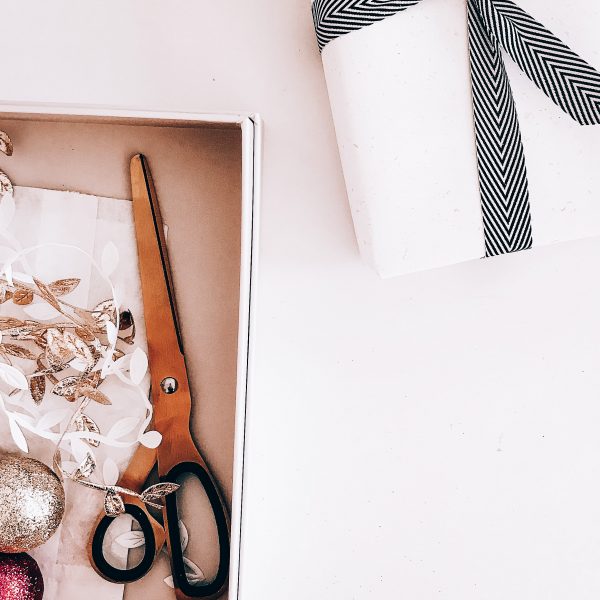