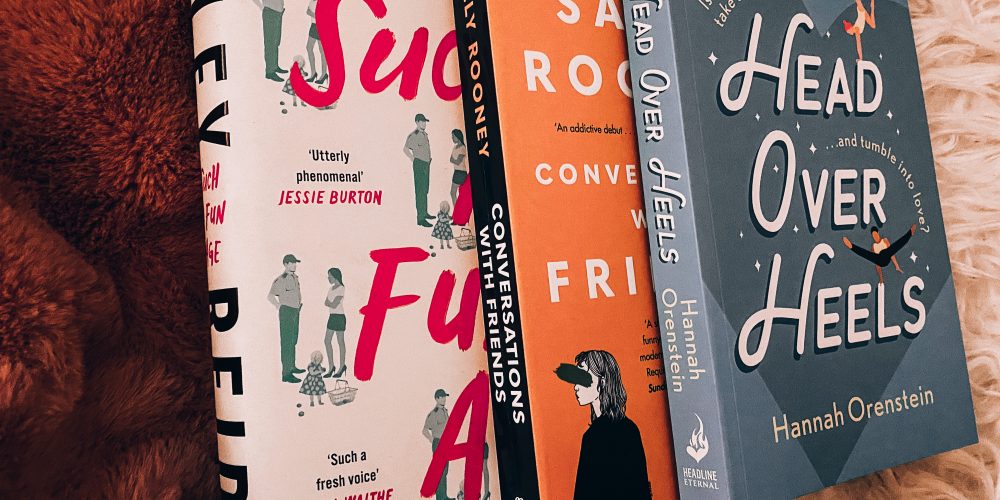 Can anyone else believe it’s July? I surely cannot.

But then, on the other hand, the first book on this list feels like I read it such an age ago, but maybe that’s because June was one of the better reading months of this year. Not something I thought I’d ever imagine saying. There have been some five star reads in June 2020, making sleep near impossible through desperation to read.

Which makes this list even more surprising to me. Usually, when I read a lot I find myself burning out, but not this month.

But, I won’t waste anymore of your time, welcome to my June 2020 reading wrap up.

To kick start June, I read this super fluffy read about Hugo—a famed sextuplet from Surrey—is dumped by his girlfriend Margaret just before an upcoming train across America, he only has one option, doesn’t he? Search online for someone with the exact same name as his ex-girlfriend so he can still go on the trip.

Which, sounds foolish but it was actually one of the cutest, nicest reads I’ve had this year. Hugo and Mae (the new Margaret) are exactly what the other needs. Sparks fly, but they’re reserved at first due to the train’s small living area, but they push one another to be vulnerable—Mae with her art, and Hugo with his true feelings about his family.

It is still a story I hold close to my heart, and am so glad I took a chance on reading it.

Sometimes, all you need is love.

I enjoyed this one, and am still very touched I was allowed an ARC through NetGalley to be able to read this book, but it wasn’t one of my favourites of the month by a long shot.

In Melbourne, it starts with Lona sneaking into the dark room of her old college—the same college she dropped out from. She works part time at a roller disco, and she’s in a platonic love/relationship with her best friend Tab.

What Young does well is show the difficulties of being twenty, the anxiety and the sense of social isolation we all fear as we grow up, and become even less sure of ourselves. But, I didn’t feel Lona progressed in herself fall that much, and her relationship/love with Tab didn’t feel like it was used as much as the story laid down initially. Lona never seems to want to fall, out of fear of being caught, and I think sometimes I felt so close to Lona for that reason, I became disengaged with her when she wouldn’t act.

However, I loved the writing style by Young, and there are some really interesting dynamics in the book. I just, overall, don’t think it was the book that gripped me as some of the others on this list.

Conversations with Friends
By Sally Rooney

Frances is twenty-one year old student from Dublin who performs spoken word with her best friend—and ex-girlfriend—Bobbi. When they are befriended by Melissa (a well known writer) who is married to Nick (an actor) the two women are thrown into a life they’re not quite prepared for.

It’s a book you may enjoy, but you won’t agree with. It’s morally grey throughout, you know what they are doing is wrong, and yet you’re furiously turning the page to find out what happens next. And, actually, I believe this is a really good book at showing the mistakes we make in our twenties (because, for some of us, we aren’t the sharpest—myself included).

When it came to rating this book, I struggled between four and five stars. Even now as I think over it. I don’t condone the theme which occurred in the book, but also I couldn’t stop myself from reading and being drawn in by it. It’s… amazing, and it doesn’t try to be anything but what it is, which I think is all credit to Rooney.

Queenie Jenkins has just gone on a ‘break’ from her long-term boyfriend Tom and she’s struggling. She’s struggling because it’s just a break, but he won’t return her calls, her family who pull her in two directions, and her boss who doesn’t understand she needs to gossip.

This book is frank and honest, its depiction of mental health is something I felt was done exceedingly well, I just wish we downfall wasn’t as long as it was. I wished we got to see more of Queenie at the end of recovery, or recognising her mistakes.

This book had so many beautiful moments, all overshadowed by the frustrated feeling I had of waiting for Queenie to wake up and smell the coffee. But, on the same hand, I couldn’t put it down. I wanted Queenie to find herself again, I wanted to see her pick herself back up.

Which, is why I rated it as a three.

Head Over Heels
By Hannah Orenstein

We know I loved this book. I think I screamed about it on my blog, that post is here. I also think I told a LOT of people about it. But to recap:

Avery Abrams was due to be in the Olympic gymnastic team, but an injury ended her athletic career for good. It took her a while, and a break-up, to finally push her to come home, and become the person I think she was always meant to be.

Whilst helping to coach a young new promising Olympian, Avery finds sparks fly with the other coach, Ryan, and herself feeling more a part of something than she has in years.

It doesn’t matter if you’re a sportsman/woman, in all of us can relate to the heartache of not making something. We can also related to our relationship crumbling around you, and Hannah Orenstein writes it so humanly in Head Over Heels and so raw you can feel every ounce of Avery’s pain. Even later, when her confidence is growing and she finds herself once again betrayed, you feel her pain, but marvel at her strength to keep going.

Such A Fun Age
By Kiley Reid

We end the round up with a corker of a book.

In the midst of a family crisis one late evening, white blogger Alix Chamberlain calls her African American babysitter, Emira, asking her to take toddler Briar to the local market for distraction. There, the security guard accuses Emira of kidnapping Briar, and Alix’s efforts to right the situation turn out to be good intentions selfishly mismanaged.

I’m going to start by crowning this book my favourite of the month.

The writing is beautiful, and sublime. It captivated me immediately, wrapping and pulling me in and by the time I was a third of the way through, I had fallen in love with Emira. Emira is calm, caring, and holds her head up high even when the world expects her not to.

Alix, on the other hand, is an insecure very selfish character I loathed an incredible amount, that also made me excited to see her downfall.

I was gripped the entire way through, I was actually upset when I finished the book, even though the ending was just as satisfyingly as the rest of the pages. I loved it that much, I want to read it again, and I couldn’t recommend it highly enough.