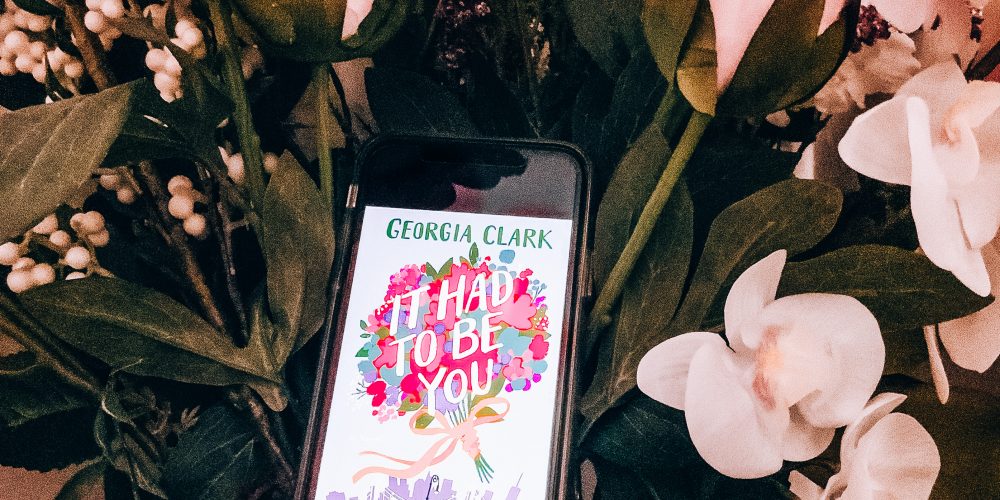 It Had To Be You, by Georgia Clark, is a story about romance. But not in the sense of a single boy meets one girl—and rather more as an ensemble love story. Its set-up is similar to Love Actually and New Year, where couples around the main character intertwine with her life.

Rating: 4.5 stars out of 5
Genre: Adult Romance
An affiliate link is used later in this blog post, you pay no more, but by doing so supports the running of this blog.

We first meet Liv Goldenhorn at someone else’s wedding, where she is the wedding planner. Things are quickly getting out of hand as she is waiting for her husband to arrive to help. Because Liv, like those she works for, has married her forever. Her sweet, stable forever, who doesn’t show up when he said he would. Liv, becomes agitated, calling him only to find another woman’s voice answering her husband’s phone.

Not only was Eliot Goldenhorn cheating on her, but he has had the audacity to die while he is with this other woman in a different city. Liv’s world is further shaken when Savannah, the other woman, turns up claiming she owns half of Liv and Eliot’s business, ‘In Love In New York’. Liv, like most, wants to slam the door in her face. She almost does, until Savannah explains they have a wedding to organise, and Liv’s world blows up a little more.

I want to take a second to say a huge thank you to Georgia Clark and her publishing team for allowing me an ARC of It Had To Be You.

I’m a sucker for romance, I always have been. And reading this was an emotional and thought-provoking read in the genre, with not one love story but many. Following each of the women, and a few males, as they try and navigate the world of love, the expectations we put on ourselves, and how we handle our dreams.

At the beginning of the book, I was unsure if I would be falling in love. There was something about the initial chapters with Liv that had me feeling odd—and I couldn’t quite put my finger on it. It didn’t feel like pacing, but it was something; it had me on tender books, unsure how the story was going to play out. I don’t think this feeling resolved quickly due to the chapters changing to different characters. But, thankfully, this unsettled feeling didn’t last long and smoothes out later, having little effect on my overall thoughts. Because of this, I allow myself to be guided by the story, finding myself growing comfortable in Georgia Clark’s hands and words.

The point of view change in chapters and characters added a dynamic that felt refreshing. Making this wedding planner business feel as large—and as busy—as New York. The sprinklings of wedding talks and the mix of ages of the characters kept things relatable to me from various parts of my past.

I like that the characters came from all walks of life, each with their own backgrounds, problems, flaws and strengths. The way they all crossed into one another lives made them feel more tangible and relatable.

Throughout the book, we meet varied characters, in different relationships. For me, the LGBTQ+ stories were my favourite (secondary to Liv’s). With one character embarking on a journey of a character discovering their sexuality, and another balancing a long-term LGBTQ+ romance. Another relationship deals with the ramifications of being a secret after already escaping an abusive relationship. I cannot comment on the accuracy and portrayal of the POCs in the book, and only the examples above as they are experiences I have shared.

As one may expect, the romances aren’t easy; the characters go through a growth and change which I felt were natural and human. It’s a complex set of romantic stories, but so is life. Because of this, it feels like an easy four-and-a-half star for me. Almost five stars I just wished I had more of Liv—especially in her grieving. I was invested, and cared about all of the characters, but I wanted MORE of Liv.

I also, greedily, wanted more of Savannah and Liv. These two women were thrust together in a painful way, and somehow, they navigate the space they share maturely for the most part. It was nice getting an insight into both of them, I just craved a bit more. Maybe some fleeting moments without a wedding to plan or romances bubbling in the corners of their minds.

Some of the other relationships did intrigue me, some were more loved by me than others. However, I found myself understanding when things didn’t work, and also cheered when things went well.

Were some of this book over the top? Yes. Was some of it very cliche? Yes. But such is life. Romance is meant to be large and full of life; falling in love is meant to be messy and a huge spectacle. I feel I relate to the type of love Georgia writes, and I’ll be excited to read more of her work in the future.

I’d happily read this book again, and I can’t wait to thrust a copy of it at my friends. I’m utterly grateful for an early chance to read this. I cannot wait to hold a physical copy when it comes out in May.